Using WIP For Over And Under Billing - Avoid Construction Cashflow Problems!

I think we’d all agree that managing project finances is one of the biggest headaches of the job. From task value estimation and cost allocation, to invoicing and handling change requests, dealing with the money side of the business is no walk in the park. And if you’re running several projects consecutively, it’s very easy to lose track of billings and wind up in a serious cash-flow mess.

Before you know it, you’re borrowing from other projects, or worse, you’re forced to take out high-interest, short-term loans, and in no time at all, tidy profit slips out the window.

Luckily, there is something you can proactively do to stay on top of your finances; it’s called the Work In Progress Schedule (WIP) and it’s a very useful tool leveraged by successful construction firms. It’s not a magic solution to all your financial woes, but it will help you get a handle on ensuring current cost accrual is on par with billings.

Today we’ll look at the WIP in detail - what it is, what benefits it brings, and how you can deploy it successfully in your own company.

What is "Work In Progress"?

First, let’s take a look at what makes construction accounting unique. In traditional accounting such as for suppliers and service providers, revenue is recognized the moment cash changes hands, which is generally the same time the product or service is delivered and so it’s relatively easy to reconcile the books each month. This type of accounting is called ‘cash basis’.

In construction however, our projects are generally in progress, often spanning multiple billing periods with revenue arriving sporadically. This makes it very difficult to reconcile expenses with revenue, and can lead to balance sheets that paint a very dismal picture of financial performance. For this reason, a more specialized accounting method is needed.

Companies that employ long term contracts, such as those in the manufacturing and construction industry use a type of ‘accrual basis accounting’ called Percentage of Completion (POC). The concept behind accrual basis accounting is that as every cubic yard of cement is poured, and as each nail is hammered in, cost is continuously being accrued in both materials and labor and therefore, revenue (the claim on completed work) is also increasing. Even though no cash has changed hands, revenue is considered to have been accrued based on future billings to be paid.

The Work in Progress Schedule (WIP) is a critical report used in Percentage of Completion accounting to calculate a project’s true profitability by leveraging three key metrics:

Taken together, these values can demonstrate to project managers, owners, and third parties such as bankers and surties exactly where your projects stand in terms of build completion, revenue realization, and profitability. WIPs are also used to track contract value, costs both incurred and projected, and to help reveal negative trends before they become bigger problems. Moreover, the values of multiple projects can be aggregated together to measure company-wide performance.

Perhaps most importantly, the WIP is used to calculate over and under billing amounts which are essential in helping you and your PMs ensure expenses are being well-managed.

The WIP Schedule is extremely effective in demonstrating whether and by how much projects are over or under billed. It does that by showing the difference between recognized revenues and actual billings. Remember that in Percentage of Completion accounting, revenue is accrued constantly, so at any time you can visualize the ratio between cost and revenue to ascertain the financial health of your ongoing project, and if necessary, implement changes.

For a multitude of reasons, it’s not uncommon to be over or under on billing at any given time and in itself, being in such a state doesn’t necessarily represent a problem. However, unchecked O/U billing can lead to all sorts of financial problems and can throw up red flags for lenders, highlighting a company as financially struggling and/or mismanaged.

A project is 'overbilled’ (Billings in Excess of Costs) when the total amount of revenue billed to the client so far exceeds the cost of work completed. On the balance sheet, overbillings are shown as liabilities because even though the physical revenue has come in, the correlating work hasn’t yet been completed. For example, if a contractor has completed 20% of the workload and has already billed 50% of the job, they are overbilled by 30%.

Overbilling is fairly common in construction because contractors usually frontload (bill higher up front), anticipating future cash flow problems due to typically slow payment cycles. However significant overbilling, especially on longer projects, can lead to job-borrow, which is when a contractor mistakenly assumes cash sitting in the bank is profit, and uses it on something else, unintentionally driving future cash-flow problems.

A project is ‘underbilled’ (Costs in Excess of Billings) when the cost of work completed so far exceeds the amount of revenue that has been billed to the client. On the balance sheet, underbillings are assets because they represent future revenue to be billed on work that has already been completed.

Often the result of a contractor not invoicing on time (slow billing), underbilling can also be driven by poor up-front cost estimation, unapproved change orders, incurring costs for non-billable work, and even forgotten frontloading. Underbilling can lead to serious cash-flow problems, forcing the contractor to pull funds from other projects (job-borrow) or from personal accounts, or even worse, to apply for high-interest, short-term loans.

Running regular WIPs should help project managers avoid these problems in the first place. A well-compiled WIP schedule will deliver accurate data upon which solid decisions can be made, and can help a company better support project managers to get their jobs done on time and on-budget.

Many contractors and project managers still make job cost projections based on their ‘gut-feel’ and are unable to anticipate problems like budget overruns before they happen. WIP scheduling, when mandated by a company, forces project managers to understand and be accountable for their job costs. By learning the concepts of WIP and how to define and calculate O/U billings, PMs can be much more in touch with results project after project and ultimately help drive down unnecessary costs and errors.

Building A Work In Progress Schedule

Now that we’ve identified why WIPs are so important in construction accounting, let’s take a look at how to put one together.

First off, WIPs should be built for each individual project the company is running and aggregated for an overall view of the company’s true financial performance. Also, it’s really important that data used in the WIP calculations is exact, so it’ll you’ll want to get both your accountant and your project manager together on making sure you’re capturing the right projections.

There is no common format in WIP Schedule creation and depending on your needs, and those of whomever is looking at your finances, WIPs can include many different metrics. Take a look at the chart above and you’ll find the most common. To calculate them, we use the three formulas below:

The first step is to define the project’s Percentage of Completion by dividing the Total Cost Incurred by the project’s Projected Cost. Take a look at the graph below: 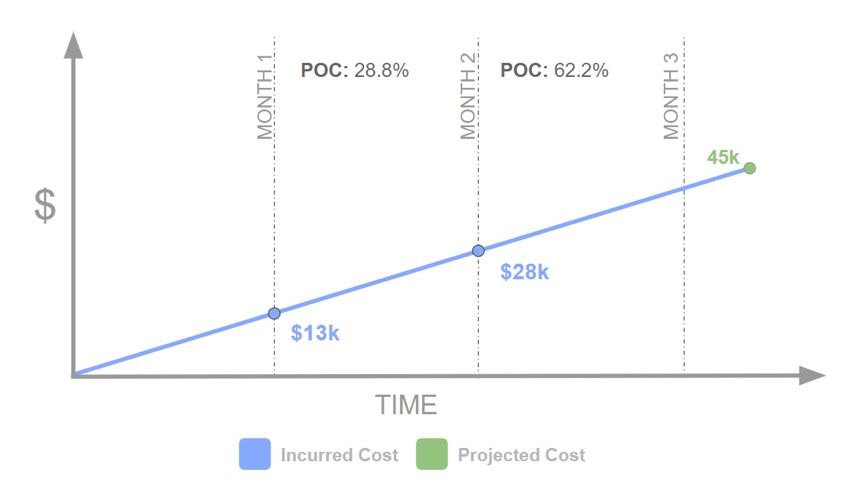 Projected Cost is often called the Estimated Cost to Complete, and is the amount that the project manager anticipates the project will cost in the end, including all change orders, labor overruns, etc., to date. Projected cost should be assessed by the PM at least once per month and must be as accurate as possible.

Total Cost Incurred represents the total cost that has been accrued to date. Be careful summing this number up; it can be quite challenging to accumulate costs incurred to date. First, make sure the costs you’re capturing have the same period cut-offs; that they fall within the same date range. Second, keep in mind the job cost allocation. Elements like labor, materials and overhead are often used across multiple projects concurrently so you’ll need to split costs across each.

Incidentally, most contractors use cost to define percentage of completion but other measures can be used as well such as total man hours worked, total units etc,.

The next step is to consider your billings and to define your Earned Revenue to Date which is the Percentage of Completion (defined above) multiplied by the Projected Revenue.

Please consider the graph below: 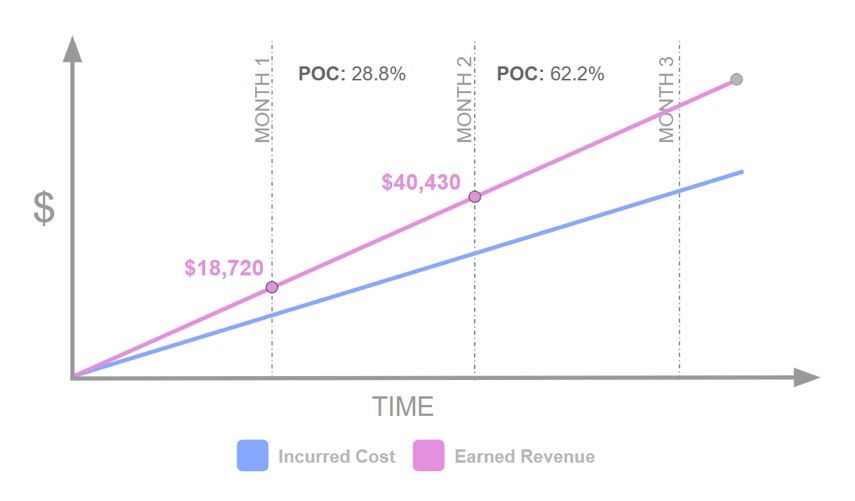 Formula: Over / Under Billings = Total Billings to Date - Earned Revenue to Date

Finally, we can define the Over/Under Billings by taking the Total Billings to Date and subtracting the Earned Revenue to Date as defined above. This will give us the difference between recognized (earned) revenue and actual billings. 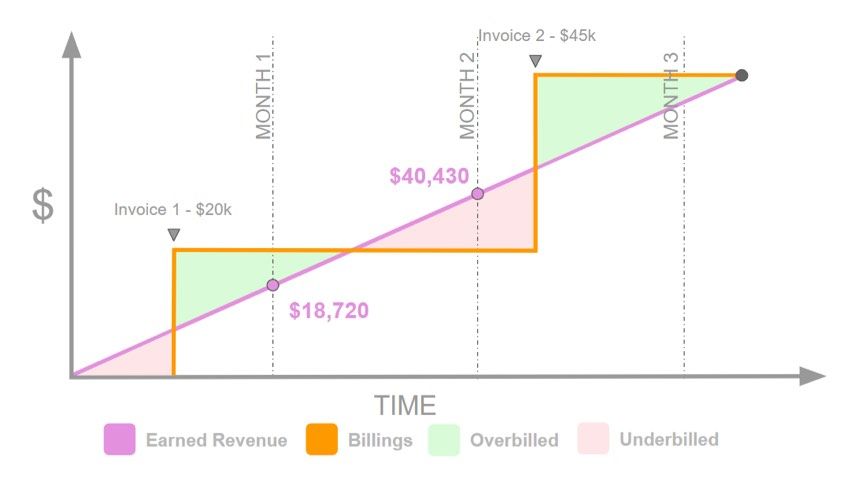 If you were to produce a normal Balance Sheet for Month 2 using cash basis accounting, it would indicate an incurred cost of $10,000 with no new revenue. However, with POC, we can clearly see that revenue accrued slightly higher than cost.

To calculate over and under billings for each month, we simply subtract the Earned Revenue (calculated in the last step) from Total Billings.

So, by the end of both Month 1 and 2, Total Billings to Date (TBTD) was $20,000. From this, we need to subtract the Earned Revenue to Date amounts from the previous example.

By the end of Month 1, we can see that we were overbilled slightly by $1280 which presents a small liability because the owner has a claim on the uncompleted work. However on the other hand, by the end of Month 2, we were largely underbilled by $20,430 meaning that expenses were being covered out-of-pocket.

As you can see, building a WIP is fairly simple provided you have accurate financials, and by running regular WIP reporting, before and during construction, you’ll always know where you stand.

Easy to use timecard and location tracking app

Know where your team are and what they're working on